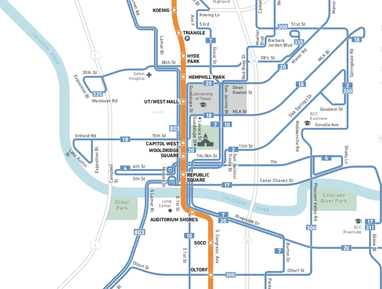 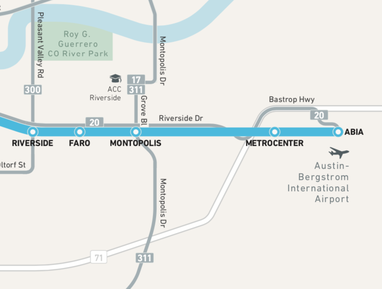 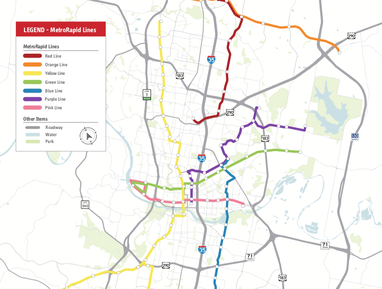 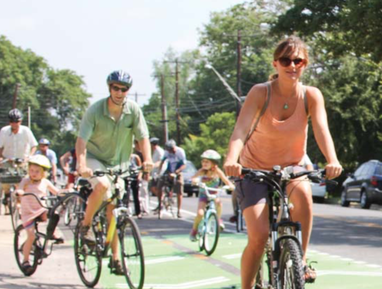 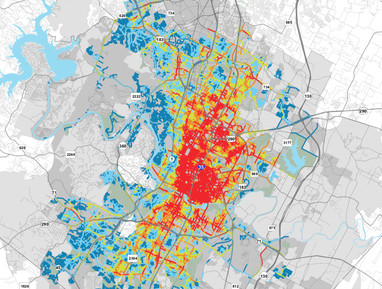 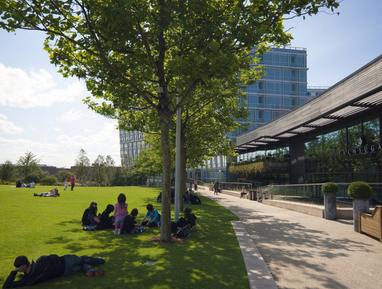 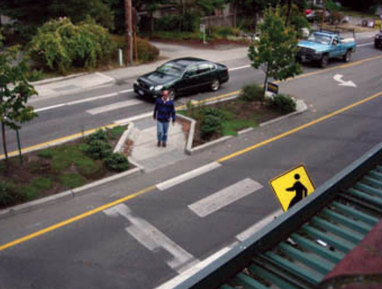 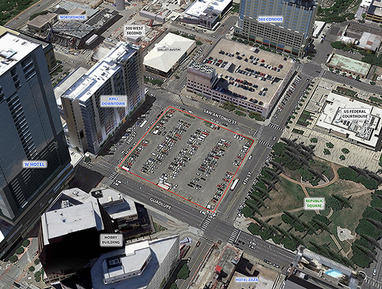 This is the much-awaited high-capacity transit spine Austin needs as a foundation to a widely-used system.

The Orange Line runs through the region's highest ridership transit corridor and has the potential to produce the most significant ridership increases while efficiently using scarce operating funds.

The combination of Orange Line light rail with our ambitious land acquisition fund represents a meaningful investment in permanent affordability that will help house and transport thousands of Austinites, while also helping to reduce the City's carbon footprint.

The Orange Line cost estimate is based on Project Connect's Orange Line Capital Cost Estimates from October of 2019.

The expected local share is roughly $2.28 billion. In addition, we added $802 million as the Orange Line's share of the downtown transit tunnel and $95 million as its share of the needed support facility upgrade.

Plan the sequencing of the Orange Line's construction in coordination with 2018 Affordable Housing Bond projects and land acquisition fund investments to protect housing affordability near its stations.

Linking one of the most dense residential areas to the region's job core, while providing the downtown-to-the-airport transit option coveted by Austin voters.

It also provides the broader electorate with the much-sought amenity of a rail connection from the Airport to central Austin.

To address the pressure that the initial years of the Blue Line will put on CapMetro's operating budget, we urge investment in a land acquisition fund that re-orients appreciating commercial real estate rental values as a result of the Wheel Deal back into transit operating funds.

The Blue Line cost estimate is based on Project Connect's Blue Line Capital Cost Estimates from October of 2019.

For the East Riverside-ABIA surface segments, the estimate provided by Project Connect is $1.4 billion. We assume a 40% match from the Federal Transportation Administration's transit infrastructure grant program.

The expected local share is roughly $840 million. In addition, we added $296 million as the Blue Line's share of the downtown transit tunnel and $35 million as its share of the needed support facility upgrade.

Council should use the proposed land acquisition fund to generate dedicated operating revenue for the Blue Line.

Plan the sequencing of the Blue Line construction in coordination with 2018 Affordable Housing Bond projects and land acquisition fund investments to protect housing affordability near its stations.

Every part of the city gains frequent buses with quality stations. Unlike the existing Project Connect proposal, our version calls for all of the MetroRapid lines to run on dedicated transit lanes.

Bus Plus is a capital-efficient approach to gaining dedicated transit lanes, while also providing coverage throughout Austin.

The Bus Plus cost estimate is based on Project Connect's MetroRapid Cost Estimates from October of 2019.

The estimate for MetroRapid expansion provided by Project Connect is $170 million. We assume a 40% match from the Federal Transportation Administration's transit infrastructure grant program.

City Council must provide dedicated transit lanes on right-of-way under its control.

The routes with the highest expected ridership should be implemented first.

Completing a network of over 300 miles of protected bike lanes & urban trails.

Creates an extensive network of bike lanes and urban trails throughout Austin. The network is based on the adopted Bike and Urban Trails Master Plans.

A comprehensive bike network offers one of the most cost-effective options for getting substantial numbers of Austinites to use new sustainable transportation modes instead of cars.

The American cities and towns with the highest bike use range from 7-10% in their daily bike commute rate. While there is a ceiling to how many Austinites will use bikes regularly, investing in bike infrastructure is the bang-for-the-buck option because of how cheap bike capacity is compared to other modes and how fast bikes in their own lanes can move relative to cars stuck in peak-time congestion.

For example, an analysis by the City of Austin compared the cost-effectiveness of the network of protected bike lanes to the MoPac Improvement Project. The city estimated the bike plan would serve 20,000 vehicles per day while the MoPac toll lanes would serve 19,000 vehicles daily and cost about $40 million more to complete.

Protected bicycle lanes provide a physical separation from vehicle traffic through bollards, traffic buttons, or concrete curb. These lanes are also separated from sidewalks to reduce conflicts. According to City surveys, over 55% of our community would ride in protected bicycle lanes, while only 15% of our community is willing to ride in a painted bicycle lane. This is why our plan's investment in protected or bike-only infrastructure will be a powerful catalyst for bike use.

The original 2014 bicycle master plan identified a 248-mile network of on-street bike lanes and urban trails for funding in the 2014. The most up-to-date staff estimate indicates completing the so-called All Ages and Abilities (AAA) network (which includes all Tier 1 Urban Trails in addition to on-street facilities) would cost $170 million.

$47 million of the $170 million would go towards completing on-street improvements. And $123 million would complete the urban trails.

Given recent costs for City bike infrastructure projects and feedback from bicycle advocates, we assume an average cost of $1 million per on-street mile and $3 million per trail mile.

Together, these investments will ensure Austinites have over 300 miles of bike-focused infrastructure, which represents a "strategic start" to creating America's best bike network.

The selected on-street segments and trails should be updated to ensure the underlying calculations reflect population and amenity changes since the adoption of the Bike Master Plan.

The overall project portfolio should prioritize projects with the highest expected use, while making reasonable scheduling decisions to support geographic equity in the creation of new bicycle infrastructure.

Boosting walkability to transit, bikes, parks, and schools in every Austin neighborhood.

The current sidewalk gap outlined in the City's Sidewalk Master Plan is 2,580 miles.

The existing sidewalk infrastructure itemized in the Master Plan is roughly 2,400 miles. Adding 550 miles will powerfully cut the gap in every part of town.

They are a very politically popular neighborhood-level amenity. And they are very useful infrastructure for Austinites who might not or can not use commuter-focused transit or bike infrastructure, such as kids, retired elderly residents, and pets.

Our proposal of building 550 new sidewalk miles will be sufficient to build the absent very-high, high, and medium priority sidewalks identified in the Sidewalk Master Plan.

We use a cost of $635,000 per sidewalk mile, based on the cost estimates in the official Sidewalk Master Plan.

The existing sidewalk prioritization ranking should be updated to reflect new data and updates to land development regulations.

The sidewalk construction sequence should be reviewed by the City's Equity Office to ensure no part of town has to wait too long for pedestrian improvements.

Repairs and maintenance may be prioritized by staff when it is expected to yield higher mode shift than new construction.

A dedicated fund to improve shade coverage in and around high-use public amenities.

Ask any existing transit- or pedestrian-commuter and they will tell you that shade makes a huge difference. It makes the experience more comfortable.

Our draft propusal budgets $1 million per City Council district to provide sufficient funding for shade infrastructure in every part of town.

Fixing the next 10 most dangerous road intersections.

New Vision Zero funds will allow re-engineering of the 10 most dangerous City intersections that are not presently funded.

Including this provision also creates a balanced plan that offers Austinites that must remain motorists tangible, quick improvements to car infrastructure.

The ten most dangerous City intersections should be prioritized as the default spending focus.

In addition to large-scale intersection re-building, City staff may opt for an opportunistic mix of targeted raised crosswalks, slip lane elimination, signal upgrades, traffic circles, bulb-outs, and kneck downs throughout the City if they are a more productive use of funds.

Vision Zero projects should coordinate with other City transportation projects to stay on-time and on-budget.

Capturing the wealth creation effects of new infrastructure investments for the public.

A land acquisition fund will allow the City to capture the increase in the economic value of land near transportation investments.

A counter-cyclical Transit-Oriented Development (TOD) Fund will help the City purchase or develop affordable housing and other community assets near transit stations.

Austin needs an innovative approach to provide operating support for sustainable transportation modes given limited and inconsistent federal government funding, and the many fiscal constraints placed by the state on local entities.

The TOD fund size ($50 million) is based on peer funds in Denver and the San Francisco Bay Area.

The County purchased the 308 Guadalupe property for $21.75 million in 2010, which is approximately $25.85 in present-day dollars once we adjust for inflation.

In 2017, the County agreed to lease the property to private corporations in exchange for $430 million over 99 years, or $4.34 million annually.

The City's value capture approach should be comprehensive and also utilize Tax Increment Financing and Public Investment Districts where beneficial. The proposed funds are intended to complement said policy options.

Proceeds from the land acquisition fund should prioritize transit operations

The timing of acquisitions should be counter-cyclical to facilitate buying at discounted prices.